Rarely does such an early stage opportunity come along in the markets for retail investors. Todays RNS from Independent Resources (LON: IRG) could quite possibly be one of the best investment/trading opportunities for the last 5 years. This has taken the markets by total surprise although I did know of ‘something’ but couldn’t quite nail it down. Believe me I tried every trick in the book, and every trick not in the book to get the name of this company for my followers/readers. The secrecy surrounding this has been a phenomenal success akin to the success of the people now coming on to the Board of Independent Resources

Make no mistake this is now not Independent Resources. This is Sound Mark II. And we all know the Sound Energy story. James Parsons the goldenboy of AIM has transformed Sound, with a £600,000,000 valuation, with more to come… He now comes into a micro-cap distressed IRG with a market cap’ of £1.500,000. The value alone of Parsons and his team of proven management should be worth at least £10,000,000 on the MC of IRG.

Just where this share-price is going to end up over the next 2-3 years is anybody’s guess, let alone the coming days and weeks. But one thing is certain. It is going into the stratosphere! If they can replicate 10% of the Sound Energy success story that’s a £60,000,000 MC valuation. The mind truly boggles at the potential here…. Do not wait for the Open Offer. The chances are most will not get in.. Get in now!

Just what has brought this event to the market? Well here’s a wild guess. Imagine the frustration of running a USD1 billion company (fully diluted) with lots of cash and strong paper… originating dozens of world class but initially small scale assets/deals and not being able to pick them up as they aren’t Mediterranean and aren’t large enough for the company and won’t fit a future purchaser / liquidity event. To put that into layman’s terms. The Sound team are awash with top class assets but have no where to put them because they don’t fit into Sound Energy’s business plan, area of operations and scale of size. 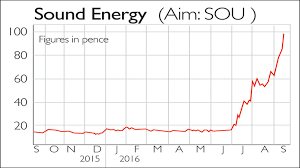 Cue Sound Mark II – an early stage vehicle with the same culture, top team and ethics.  Assets are I am sure ready to back in. I know Sound very well and I can guarantee that assets are already lined up and ready to be backed into Independent Resources. If they weren’t then this deal would never have been signed. Those assets will not be piss poor stripper wells!!  They will be top class and in typical JP style, before the launch, he offers private investors the opportunity to join in on ‘ground floor terms’ – to participate in the journey.

Get in on the JP magic again. This is the best opportunity I’ve come across in the last five years. It’s going to be emotional, a roller-coaster of events, trials and tribulations. A re-run of Sound Energy. Only this time we ALL know where this could go. It’s going to rocket. Placings or open offers will be massively over-subscribed. Every Sound Energy shareholder will pile in, Retail will pile in, Brokers will pile, Institutions will pile in even the Pump & Dumpers will try to get in on the journey… Buy! Buy! Buy! Hold for 12 months then reassess. As sure as night follows day every man jack and his/her dog will jump all over this in the coming months. 2p-3p target. But in all likelihood much, mucho, more… Three years down the line this could be many multiples of 2p/3p a share. We simply do not know how high this is going…. But UP it will go…..