The shitposters & online trolls were dealt a severe metaphorical swat to their amoeba like brains today when a TR1 from Union Jack Oil (LON: UJO) landed announcing that one of their major holders, who held 7% of the company does in fact still hold 7%, post the Company placing.

Sadly I, and others, have witnessed some of the most disgusting and offensive diatribes over a sustained period of time directed at the UJO Major shareholder, Mr Christopher Williams (Chris Oil) claiming all sorts of deliberate spiteful, malicious accusations. Ranging from having indecent images of women, paedophilia, en-masse expletives and various false claims of financial irregularity. Complete and utter bare-faced lies. Why people do this is more a reflection of what they themselves are doing ONLINE. Ergo you start accusing someone of being a ‘nonce’ then chances are you’re hiding something ‘Noncy’ yourself. Falsely accusing some one of financial shenanigans or having a penchant to masturbate into socks, same same…

It is a criminal offence to maliciously accuse innocent people of sexual crimes and rightly so! Calling an innocent man a ‘nonce’ online can have devastating repercussions of the ‘vigilante‘ kind.

The Runcorn Troll a.k.a Michael Whitlow

The main purveyor of this kind of filth is The Runcorn Troll a.k.a Doc Holiday real name Mr Michael Whitlow of Runcorn, Cheshire, (an ex sewage worker) or as most know him Shitlow! A vile troll with a history of vile abuse going back years. Whitlow was banned from twitter 2 yrs ago for similar behaviour and has sneaked back to continue his disgusting abuse under the guise of a ‘financial commentator’ where he regularly pumps and dumps companies that pay him via his shell company (Volant Services) to massively over-promote. Whitlow is the biggest coward currently spewing out most of the above. It’s sheer jealousy, spite 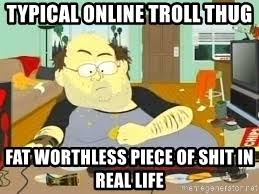 and envy of a person making substantial amounts of money on their investments that underpins most of the abuse. Nomads, companies as well as their PR representatives are constantly peppered and maligned with false accusations. The Modus Operandi of Shitlow is well known….

Now moving on to Union Jack Oil, what investors/traders fail to realise is that people like Fraser Lang and Mr Williams have backed the company with substantial amounts of their cash. As such they, just like you and me, can buy or sell their stock whenever they please. Some, like Fishermans friend, Gary Newman & Tom Winnifrith seem to be under the delusion that Major Shareholders need  their permission to sell/buy. Not-so! So long as timely notifications by TR1 holders, are adhered too then it’s the business of the Major Holders how much they have or haven’t made on their investments. You can speculate on how much etc But what you can’t do is state that they’ve sold out when today’s TR1 RNS clearly states that, that hasn’t happened.

Will there be an apology? I wouldn’t hold my breath on it…

NB. Gary Newman has tweeted to me that he has apologised. Fair dinkum etc.