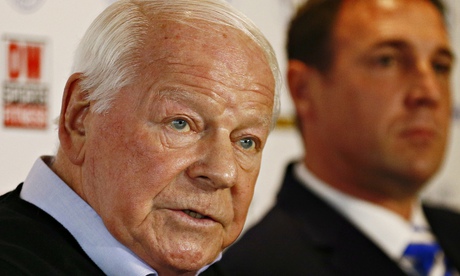 As a victim of vicious, racist antisemitism myself I can understand the fur-ore over Dave Whelan’s  comments that “Jewish people chase money more than everybody else”. Was Whelan condoning racism by saying it is “nothing” to call a Chinese person a “chink”? I personally don’t think he was.
What we have with Dave Whelan is basically a ‘Silly ignorant’ man from a different era struggling to express himself in a manner that doesn’t offend. The world has changed (Thankfully) for the better. Gone are the days when these comments went unchallenged. It is right that racism is confronted regardless of what level it rears it’s vile head or whoever (however miss-guided) voices it. Dave Whelan fails the ‘Mum test’.

Whelan is from a different era an era where what he said would not have been viewed as anti Semitic or racist by the majority then. Just a bit of good natured ribbing said in a jovial context. I remember watching a programme called Love thy Neighbour, back in the 70’s as a child. It was all quite normal to me then. Luckily for myself and my family we had a Mother who explained why what we were watching wasn’t right. Mum would change the channel as soon as she heard us laughing when it came on. She would be about the same age as Whelan now.

I shall ever be indebted to Mum for explaining to us all as a family why we should never treat people based on colour, creed or religion, any differently then we would want them to treat us. If what you say hurts people and you know it hurts then it is wrong. If what you say hurts people and you don’t know this then you are ‘Silly’. “Jewish & Irish people should lead from the front we know what it’s like to be persecuted”. (Mum was Irish. Father was Jewish) Mum really was a lady well before her time. A stunning looker in her day and as Papa would say; ‘A latter day suffragette’ who would always be helping others to get through one crisis or another. I remember a day when she came rushing into the house one winters afternoon. The rain was lashing down in a thunder storm. She ran in grabbed two pairs of plimsolls, two coats and a ten shilling note from Papas wallet. I found out years later that she had came across a woman with two boys about the same age as myself and my brother who had just been evicted and were huddled in a doorway waiting for the rain to cease. Both boys had scant footwear and no coats while the poor woman was at her wits end. Mum organised transport and got them into a shelter. That was my Mum, she would never pass by such a crisis without helping. There was another time when a young Jamaican chap was being jostled by a group of men outside our off licence shop. Mum came out and shamed the men who were intent on beating this chap for no other reason than he was Jamaican. His name was Phillip Newton and he became a great friend {and customer:-)} of our family.

The problem with Dave Whelan is that he fails the ‘Mum test’ on both counts. He must know that his comments are offensive and if he doesn’t then he is just plain ignorant or as Mum would say “Silly” Dave Whelan has referred to some of the worst old-fashioned tropes which have been used in the past as the basis of antisemitism and stereotyping of Jewish & now Chinese people, by trying to defend employing Mackay who himself is under investigation for using anti Semitic/racist language in texts and emails.

No. In my opinion he is an anachronism, as Mum would say a “Silly man” who is out of sync’ with the world as we know it.